Skip to content
A Canadian rapper has died while filming a stunt that involved rapping while walking on the wing of a plane, in an airplane stunt that went horribly wrong.
A popular Canadian rapper, Jon James, was killed on Saturday, Oct. 20, when he fell to his death in British Columbia while filming a music video in which he was walking on the wing of a plane while rapping. According to a statement from the rapper’s management, the 33-year-old who was known as an accomplished freeskier and stuntman, had been working on the shoot for months, training “intensively.”
“However, as Jon got further out onto the wing of the plane, it caused the small Cessna to go into a downward spiral that the pilot couldn’t correct,” the statement said.
“Jon held onto the wing until it was too late, and by the time he let go, he didn’t have time to pull his chute. He impacted and died instantly.”
The plane reportedly landed safely and no one else was injured in the accident, which took place in Vernon, British Columbia.
“Jon was an incredibly passionate person and was always smiling. He filled everyone around him with positivity, and never spoke poorly about another person. He truly had a heart of gold.” 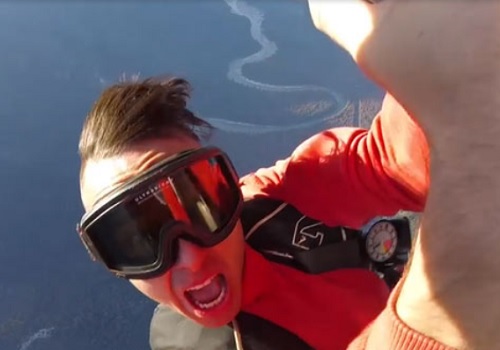 McMurray’s music videos frequently featured him performing stunts, from parkour flips and BASE jumping to skydiving, including a 2015 clip for “Hello” which opens with the rapper admitting that he “broke” a parachute while prepping for the shoot. The rapper grew up skiing in the Rocky Mountains and was an accredited professional skier who logged several firsts, including landing the first backflip on and off a rail.
After suffering a broken back and shattered heel, he switched from pursuing his dream of professional skiing to being a musician.
“His passion for making music videos and performing stunts were combined, and Jon pushed music in a new direction that was uncharted territory,” the statement read.
The Royal Canadian Mounted Police, coroner’s office and Transportation Safety Board have begun an investigation into McMurray’s death. A GoFundMe page has been set up to “get his stuff out there to the world in the right way… [and] help with Jon James’ celebration of life.”
Source: Tori
Share
Share this...

Nollywood actress, producer,  and television personality, Yvonne Jegede has issued warnings and words of advice to those who try to shame her over her “failed marriage”. Yvonne Jegede in an interview with Pulse had admitted her marriage to Olakunle Fawole popularly known as Abounce, crashed many months before the birth of their son, Xavier. The […]

A £150,000 bespoke Range Rover has been stolen from boxing heavyweight champion, Anthony Joshua, in the early hours of yesterday. Joshua has vowed to round up the thieves who stole the vehicle just days before his WBA, IBF and WBO heavyweight title defense against Alexander Povetkin. The Range Rover was taken from a relative’s home in […]

Nigerian singer and songwriter, Olawale Ashimi Ọlọfọrọ best known as Brymo is currently trending on social media over the spate of tweets he sent during an exchange he had with some non-fans who tried to talk down his art. This is coming weeks after he released his eighth project and seventh studio album, titled “Yellow”. […]