Mavin star, Johnny Drille, has been pictured on stage wowing fans in Lagos at his first every live concert. Johnny Drille, an alternative musician signed to Mavin Records, delivered stunning performance after performance as he hosted his first live concert on Sunday.
Tagged ‘Johnny’s Room’, the event held at Muri Okunola Park, Victoria Island, Lagos, and thousands of Drille’s fans were in attendance. Simi, Tjan, Kenny Blaq and Ric Hassani were the guest artistes at the concert which fans on social media have called “outstanding”.
After the event, Drille said he cried after getting overwhelmed by the show of love he received from fans.

He said: “Thank you guys for showing me love tonight, it was overwhelming. I cried. I sold out my first ever live show.”
Don Jazzy, record producer and Mavin Records founder, described the concert as the best live event he has ever attended in Lagos.
He wrote: “Today I witnessed greatness. I saw the beauty of patience, hard work and dedication to your craft. #JohnnysRoomLive tonight was the best live event I have ever been to in Lagos. And the @Johnnydrille fans are soooo amazing. Thanks to everyone for showing up.” 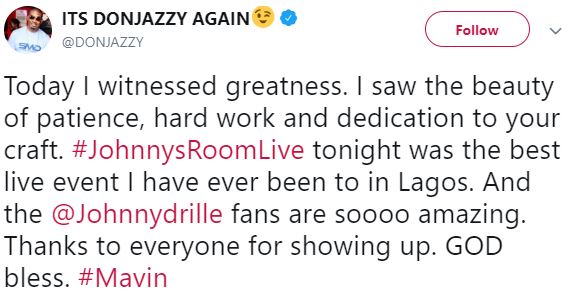 Drille’s parents flew into Lagos to watch their son perform. The singer is an alumnus of Project Fame, a music talent show.
Below are more photos from the first ever Johnny’s Room: