Skip to content
Linda Osifo got some hard lesson notes from an Instagram follower who lectured her about dressing the same way she would love to be addressed.
Nollywood actress Linda Osifo reacts after she was slammed by a troll for inappropriate dressing and was also told to look up to the likes of Adesua Etomi.
Her fans felt she exposed much of her ‘camel toe’ which they regarded as ‘kpomo’.
The social media critic said: “Look at small small boys that are not up to ur younger ones age telling you that they like your “kpomo”..is that the kind of compliment you intended to attract when you posted this pic?? Smh somebody’s future mother kpomo on Instagram. Dress how u want to be addressed!! Look up to the likes of Adesua Etomi Madam! Be responsible. If you like block me, all I know is I’m speaking the truth”
Watering down the attack, Linda Osifo responded thus: “Block you? No darling! Enjoy the post babe and I don’t look up to anyone but myself.” 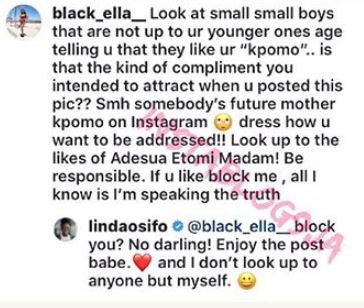 Nigerian girls have turned social media apps designed for connecting with new people and staying in touch friends, family and acquaintances to a hub for digital prostitution. When Zuckerberg designed Facebook or when Kevin Systrom and Mike Krieger built Instagram from a co-working space in San Francisco, when Sean Rad invented Tinder or when the […]

The ceremony which was held on  Saturday December 15, will be officiated by the outspoken Catholic clergy, Bishop Mathew Hassan Kukah. Maverick Nigerian entertainer and activist, Mr Charles Oputa, better known as, Charly Boy or Area Fada will walk his long time consort, Lady Diane down the aisle in Abuja for formal exchange of marital […]

Popular Nigerian Singer, Kizz Daniel has slammed a N100 million lawsuit against Vanguard Newspapers over what he tags as a “malicious publication”. Last week, the singer had called out the newspaper and also denied granting an interview which stated that he attacked celebrities for protesting against COZA pastor, Biodun Fatoyinbo, who is currently enmeshed in […]